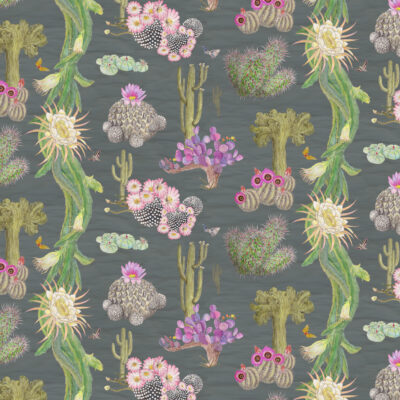 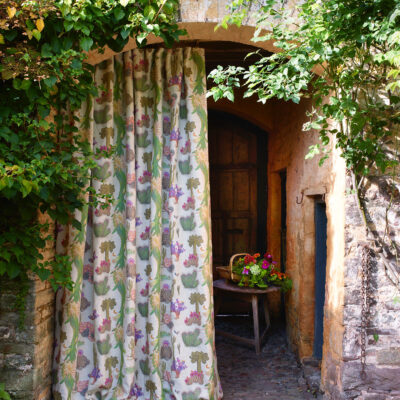 This design celebrates the incredible diversity of Mexican cacti. It is the culmination of several years Dr Susy Paisley spent in Mexico, one of the world’s centre of endemism for this group of plants. It includes marvels like the Creeping Devil, a cactus in this design which actually moves across the desert floor! Cacti are enjoying a new popularity, but globally, one out of three cacti is in need of conservation attention. The design includes the Chisos Mountain hedgehog cactus, hallucinogenic Peyote, a critically endangered dragonfruit, which forms the long tendrils in the design, and lesser long-nosed bat (an essential pollinator for cacti) and the iconic saguaro and crested saguaro cacti. 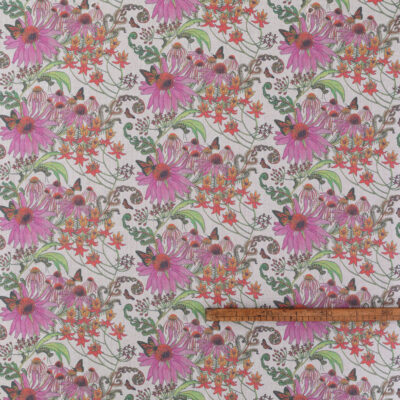 This medium scale print celebrates the migratory Monarch butterfly whose larval food-plants, the milkweeds, have been depleted to critically low levels by herbicides. The population of monarchs that spends its summers in the Carolinas, undertakes an incredible multi-generational migration every year to forests in Mexico where they overwinter. Plants like echinacea provide them with rich sources of nectar for this journey. As well as Echinacea purpurea, the most common of the coneflowers, this design features Echinacea leavigata, an endangered coneflower native to North Carolina. 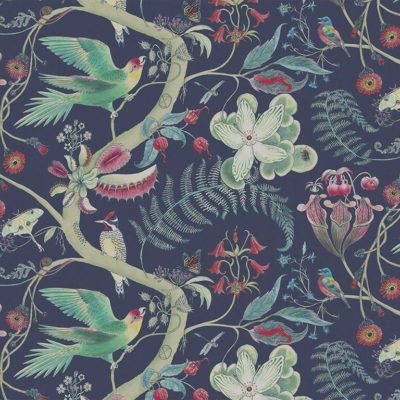 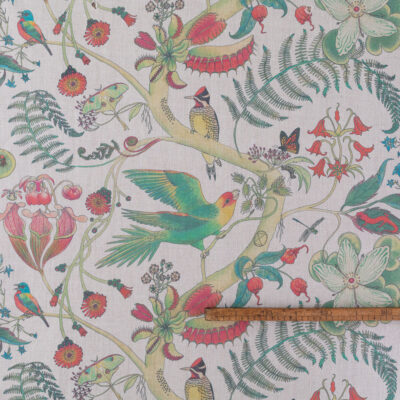 Carolina Tree of Life is a lush, hand-drawn design which celebrates wild species of the Southern States of the Carolinas. The designer is a conservation biologist who grew up in this beautiful area. The rich colors and graphic details are matched by the interest of the many extraordinary species depicted, including the extinct Carolina Parakeet and iconic species like the painted buntings, red salamanders, monarch butterflies (facing an urgent battle for survival), chilli peppers and carnivorous plants like the Venus Fly trap. The design itself has a contemporary feel but draws heavily on traditional 18th century French Tree of Life designs. 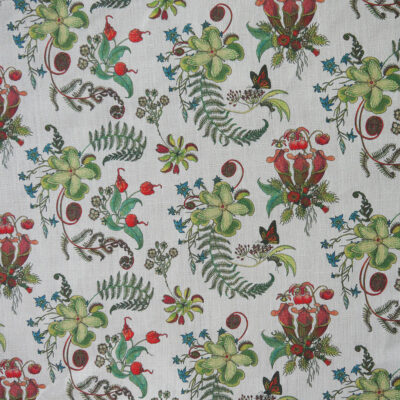 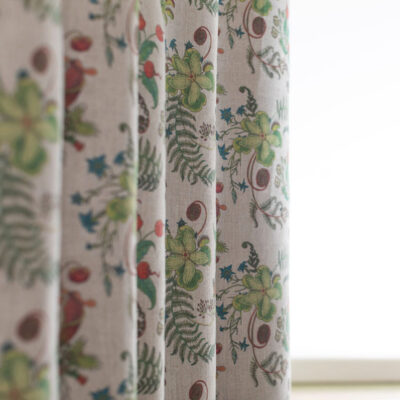 A simpler medium scale companion fabric to the Carolina Parakeets available in 7 colourways. Carolina Posies is a lush, hand-drawn design which celebrates wild species of the Southern States of the Carolinas. The designer is a conservation biologist who grew up in this beautiful area. The rich colors and graphic details are matched by the interest of the many extraordinary species depicted, including monarch butterflies and their larval foodplants, milkweed, Carolina Reaper chilli peppers, devil’s paintbrush, pine barren gentian, grass of Parnassus and carnivorous plants. Carolina Posies is a detailed botanical with an enchanting meandering feel, part of a growing passion in interiors for honouring the natural world. 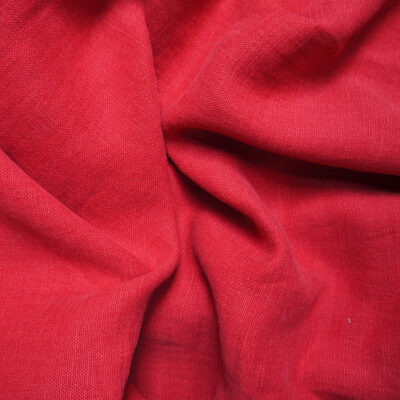 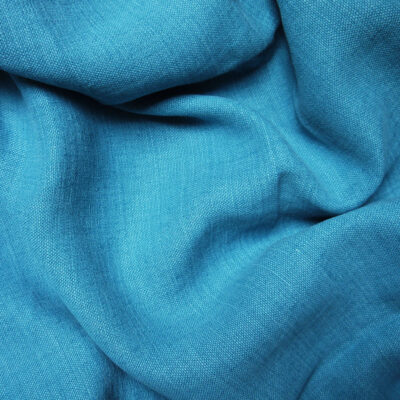 (Price above is per sample – please email us for the full pricelist.)

This heavy pure linen has deeply saturated colours that coordinate beautifully with the printed fabrics, echoing the printed colours but going deeper. They are soft and have a wonderful drape. 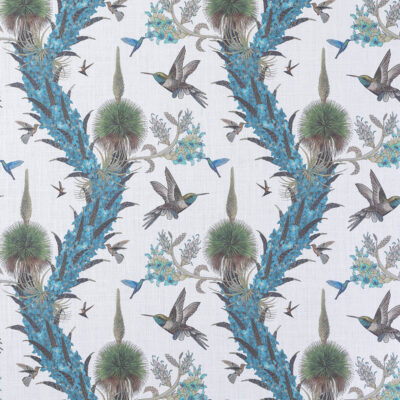 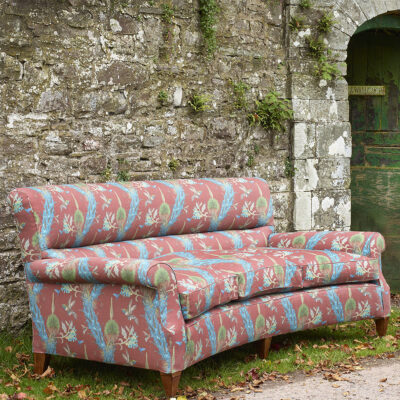 The Madidi Hummingbirds design is a tribute to the incredible diversity of Andean hummingbirds, of which there are 140 different species. This design features Andean Hillstars, Great Sapphirewings, and Giant Hummingbirds. These super-heroic little birds can fly at speeds which, relative to body length, are greater than any other vertebrate, with wing-speeds of over 80 beats per second. They also serve as specific pollinators for many flowers such as those in the Puya genus. The bases of these bromeliads are important bear foods and many have beautiful turquoise flowers. They also have natural antifreeze and some of the longest flower spikes in the world such as Puya raymondi, known as Queen of the Andes, the spherical plant bases and spikes depicted in this design. This plant grows to 15m (50ft) tall with 30,000 individual flowers when it blooms, which is once every one hundred years!

The contemporary design has quite an elegant structured style and a limited palate based around the blues and greens of the Puya flowers. With exquisite botanical detail, it builds upon the current passion in interiors for honouring the natural world. Furthermore, for every roll of wallpaper sold, 100m2 of critical wild habitat is preserved through World Land Trust. 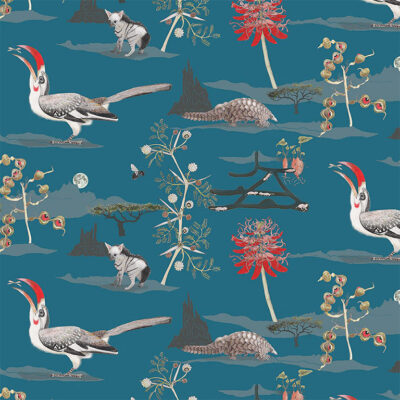 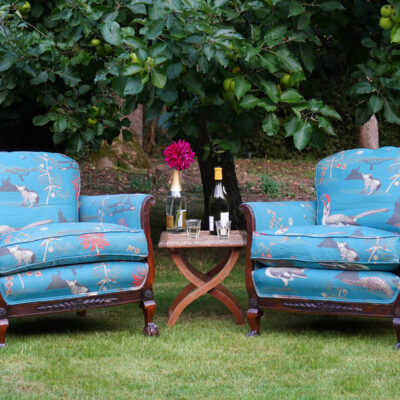 This design is based at the Lewa Wildlife Conservatory in Kenya. This incredible place was a cattle ranch 40 years ago and has been transformed by the Craig family into one of the most successful private wildlife conservation initiatives in the world, and a UNESCO World Heritage Site. There is a theme of myrmecophagous species that specialize in ants and termites. The species featured in this design include Jackson’s hornbill, termite mounds, a young aardwolf, A mother Temnick’s ground pangolin with her baby riding on her back, a colony of naked mole rats, a carpenter bee, and lucky beans tree, whistling thorn acacia (which has an incredible symbiosis with biting ants), and the full moon setting over Mount Kenya, as visible from Lewa. With exquisite botanical detail, this design builds upon the current passion in interiors for honouring the natural world. 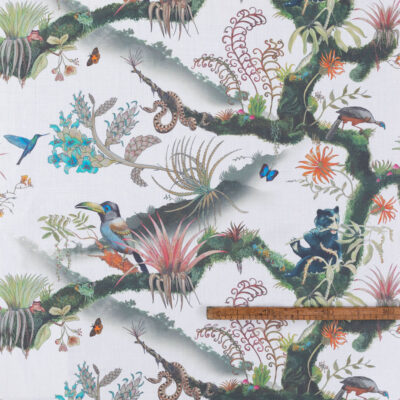 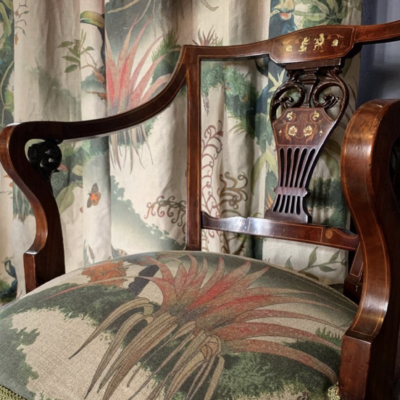 The Andean spectacled bear, a mysterious and endangered species and inspiration for Paddington Bear, was the focus of Dr Susy Paisley’s years of study in the Andean cloud forest of Bolivia’s Madidi National Park. During long periods spent alone for her research, she became obsessed with the intricate patterns and color around her. Lichens, thin-lipped frogs, hummingbirds and toucans, along with her bears, were the subjects of my detailed drawings, and have formed the basis of this design. The composition of the design itself was inspired by a Josef Frank design from 1938 called Anakreon. His design was based on a 3,500-year-old fresco, discovered by a friend of Frank’s, from the palace in Knossos on Crete. 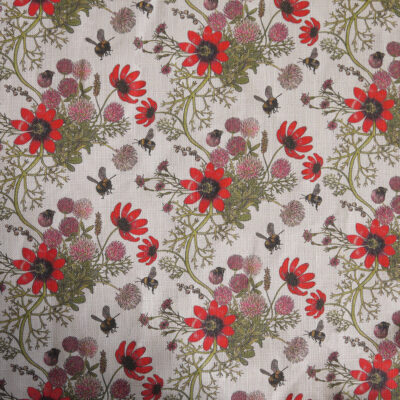 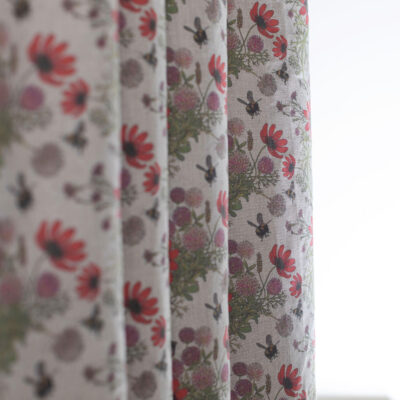 Mercia Bees is a smaller scale print in the English Mercia collection, with a 6” horizontal half drop repeat. It features the short-haired bumblebee, a species driven to extinction in England, but recently reintroduced into specially planted flower-rich meadows in the region of Dungeness. The bees are foraging on clover, and pheasant’s eye, a rare wildflower introduced to the UK in Roman times. 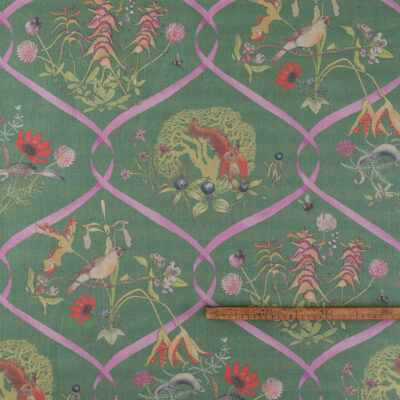 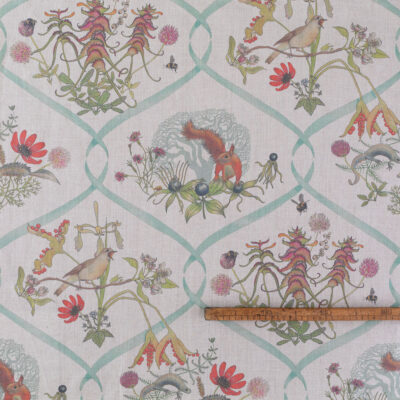 This pattern shows English species suggested by the imaginary species in Dr Suess’s The Lorax. It is organised in an ogee pattern, made of ribbons. They are reminiscent of the double helix of the DNA that determines how we all turn out, every living thing, and of chain link fences, and breaking through them to get out into nature.

The humming fish are represented by great crested newts, the precious truffula trees are clover flowers whilst the playful barballoots are the red squirrels. The bees which also feature in a companion print are short-haired bumblebees – a wonderful conservation
success story as they were extinct in the UK but acres of flower-rich meadows were planted in Kent, the bees were reintroduced and are now thriving. Other flowers include several species of clover, Pheasant’s eye, crested cowheat, Stinking iris, whorled millifoil, Carthusian pinks, Herb Paris, wintergreen and blossoms of a rare old English breed a apple. Great great grandfather snail is the lagoon spire snail (thought extinct, but recently found in Chichester harbour) 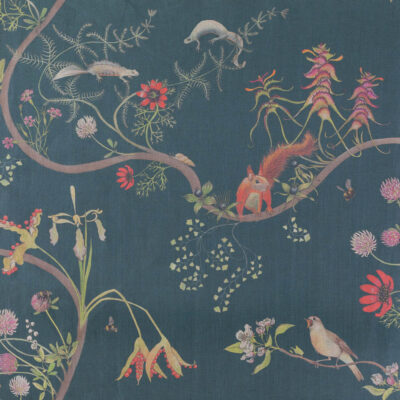 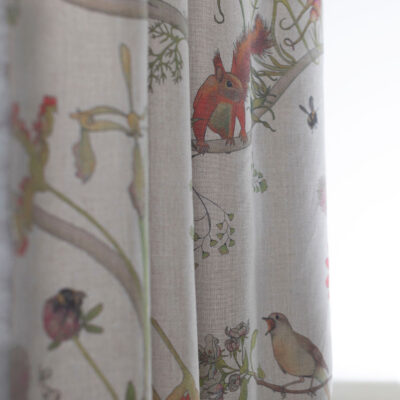 The English Mercia collection is Susy Paisley’s tribute to one of the greatest
conservation parables ever written, The Lorax by Dr Seuss. The species in
the design are based on real world English equivalents of the imaginary
species that feature in the Lorax story – inhabiting the region of the ancient
kingdom of Mercia. The humming fish are represented by great crested
newts, the precious truffula trees are clover flowers whilst the playful
barballoots are the red squirrels. The bees which also feature in a
companion print are short-haired bumblebees – a wonderful conservation
success story as they were extinct in the UK but acres of flower-rich
meadows were planted in Kent, the bees were reintroduced and are now
thriving. Other flowers include several species of clover, Pheasant’s eye.
crested cowwheat, Stinking iris, whorled millifoil, Carthusian pinks, Herb Paris,
wintergreen and blossoms of a rare old English breed a apple. 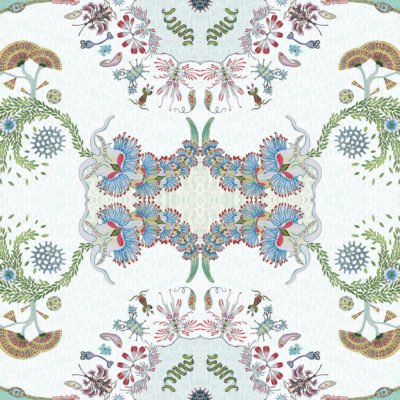 (All colours are available on both basecloths and also at both scales, although we may not offer that specific sample. If your combo is not available, we suggest ordering the colour you want to get the process started.)

Paisley Paramecium is a textile and wallpaper design celebrating the web of micro-organisms that forms the base of the pyramid of all life. The inspiration for this design was a play on the traditional tear-drop shape of the classic paisley motif resembling a unicellular organism called a paramecium. The species in this design are aquatic, including many free-floating plankton upon whom the health of all marine creatures depends. Phytoplankton are also of serious conservation concern – warming oceans have caused population declines of 40% since 1950. Change is desperately needed in how we perceive our interconnectedness within, and dependence upon, the web of life. As well as evoking droplets of water as well as using the conventions of the paisley design. It is also reminiscent of stitching and lace, as the fabric of nature is fragile and intricately interwoven and embellished. The colouration is quite free, and can be further expanded upon in the future, as many of these species are really transparent.

To learn more about the design, please check out the blog post.

We are adding prices and full e-commerce functionality to the site during September 2020. Please forgive any irregularities. Dismiss