It is late July and the flax plants that were bright green in the mist and rain of early June have now flowered and gone to seed. Flax is the plant that gives us linen: in Latin flax is called, Linum usitatissimum, or ‘linen that is most useful’. I was lucky to catch the moment that the Flax puller was in action – pulling the flax plants and laying them in tidy lines. The plants are then left to the good offices of the elements (the sun, the dew, and the microbes in the soil), to ‘dew ret’ –  separating the long bast fibres from the more easily degradable parts of the stem. These fibres are then ‘scutched’, the step in which the rest of the woody stems are removed, before being spun into thread.

I am completely besotted with everything about linen. I always have been. I am so happy to be dedicating myself to working with this noble, eco-friendly, luxurious and versatile fabric. As well as working with British weavers and printers of linen, I’m also very pleased to able to spend a lot of time in Northern France which is the epicentre of cultivation of this quintessentially European fibre. Four fifths of the world’s production of scutched flax fibers originate in Europe, and France is the world leader.

And talk about sustainability – this crop needs almost no chemical inputs and people have been doing something like this with flax for at least 30,000 years, albeit without the cool Belgian machinery. Spun, dyed and knotted flax fibres were used by European people as early as the Upper Paleolithic. I so like being a part of this ancient industry.

Amazing Grace was written by John Newton in 1779. My mother’s side of the family – the Newtons – have always liked to claim him as our forebear, although I don’t know of any actual proof. (Nobody in my family ever tries to claim Sir Isaac Newton as a forebear. He’s definitely out of our league.) John Newton was, for at least half of his life, a real bad guy. He spent the first half of his career in the slave trade, as a sailor on and eventually as the captain of slave ships (he was at one time actually a slave himself in Sierra Leone). Then the conversion. “I once was lost, but now I’m found.” He spent the second half of his career as a beloved clergyman and hymnist and fighter for the abolition of the slave trade. His about-face was profound, “It will always be a subject of humiliating reflection to me, that I was once an active instrument in a business at which my heart now shudders.”

My moving from the academic pursuit of conservation biology to a career in soft furnishings is not quite such a volte face – not quite such a rejection of a path of horrific evil for one of great good. Nor, thankfully, I am not haunted by the ghosts of 20,000 souls, as Albert Finney’s Newton was in the 2006 film Amazing Grace. On the other hand, I am pretty unlikely to leave any great legacy like Newton did. But, as I embark upon this new career, it is gratifying to reflect that the author of this great hymn didn’t begin his career as a clergyman or hymnist until he was 39, and then it was only after applying to the church and being rejected repeatedly for 7 years.

Amazing Grace has always been one of my favourites. It has long been embraced in the USA and always think of it as originating in the American South, even though it was written by a clergyman in Buckinghamshire, England (where, coincidentally I spent my first 6 years). To me, Amazing Grace conveys hope like nothing else – like when President Obama sang this hymn at the euology for Rev. Clementa Pinckney, a victim of the mass shooting at Emanuel Church in Charleston, South Carolina.

I am so excited to be working with Rochester-based animator Nat Unwin to create short films to tell the stories of the species in my designs. Here is the little film she made for me:

She explained to me about how she works, often 16 hours a day, with hundreds of layers. “Once all of the objects are prepped, I take it into the animation stage. This is like a brain training puzzle. Each object in your illustration is in its own folder which has more folders inside that and each of the folders I have to tell what to do in order for it to work properly, so they are in the correct hierarchy depending on how things are to move and how they will look.

Each object’s layers are individually animated, so the Venus fly trap for example has 37 points of interest to animate, each of those needs animating individually across the timeline, with 24 frames (or images) per second of film, so of course the longer the animation needs to be the more animating there is to do. This particular illustration has around 30 objects each with their own dissected layers. 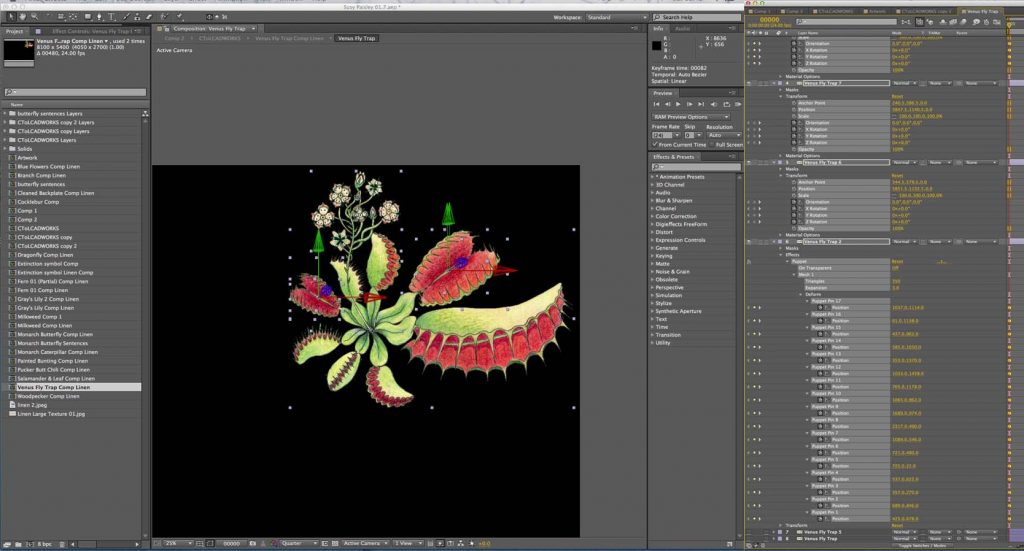 Some pieces need additional images to be drawn, for example the butterfly’s Proboscis had to have replacement animation in order to make it look like it was curling, that’s not something that can be done in the other method of animation, and an eyelid was made for the the painted bunting as I noticed when watching reference videos of them, they blink quite often (I look at reference for everything to try and get the animation true to their movements).”

It is pretty incredible stuff and magical to see the effect. Learn more about Nat on her website.

It was a great delight and surprise to win the Design Category of the Kent Creative Arts Award. I met some incredible people and felt thoroughly proud of the county where I live.

The design for which I was awarded this prize was the English Lorax, my homage to the book by Dr Suess. The Lorax has a particular personal significance for me. For one thing, it is simply one of my favourite books, and one I have taught many times to groups of children when doing environmental education. The Lorax is the book of which Theodore Geisel (aka Dr Seuss) was most proud. The character of the Lorax is all about speaking for the trees, planting seeds and looking after nature and I, Lorax-inspired, became a conservationist and have myself planted something like 80,000 trees. The significance of all of this to me is revealed in the names: my mother used to call me Dr Sus, I named my own son Theodore! I lost my mother one year ago to lung cancer. Her name was Anne Newton Paisley, and I named my textile business, Newton Paisley, after her. She provided rocket-fuel like encouragement to my efforts as a conservationist and artist, and I was very proud that she lived long enough to know about Newton Paisley. She also loved the fact that her son-in-law, my husband Simon, was to star in a production of The Lorax, as the greedy Onceler. It was a book she too loved, and credited with turning her daughter into a conservationist. Twenty years into my relationship with my husband, it is the first time that our professional paths have crossed. My husband is from Kent, where we have now settled to raise my family. We love all these ancient Kentish woods of the Blean, the great crested newts, the cow-wheat and nightingales, and I loved commemorating all of that with this design. 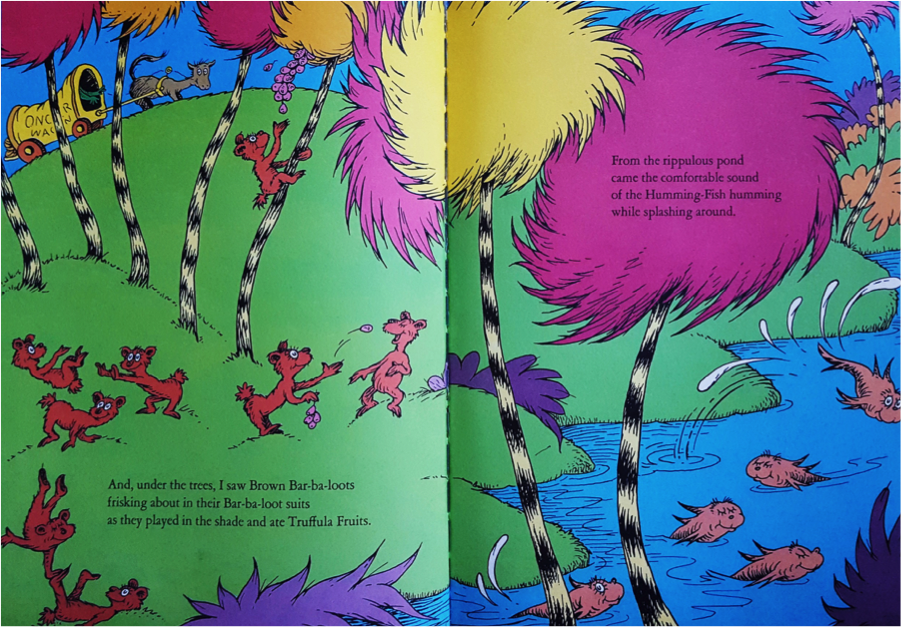 A page from Dr Suess's The Lorax showing the truffula trees, barbaloots and humming fish. 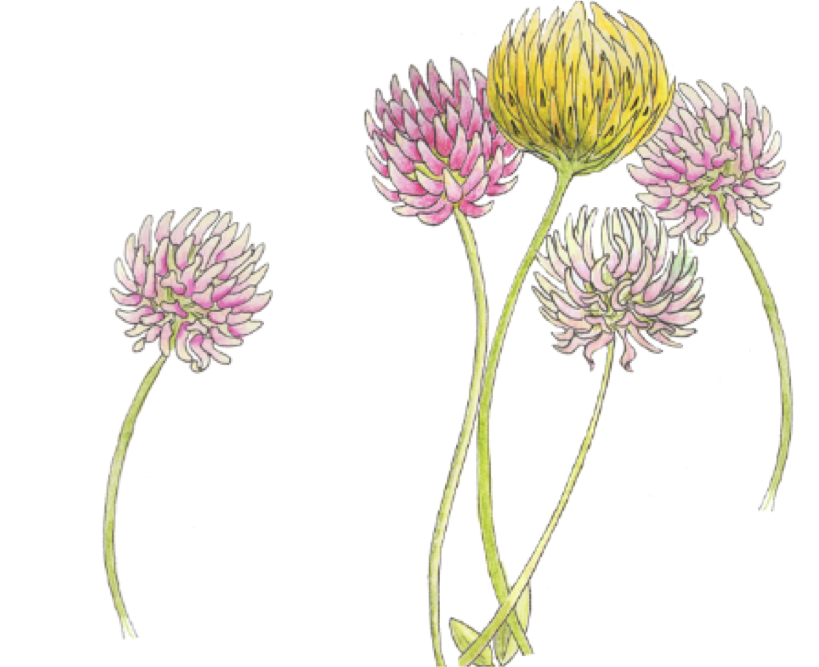 Clovers from English Lorax design, great plants for bees, and similar in shape and colour to the Truffula trees. 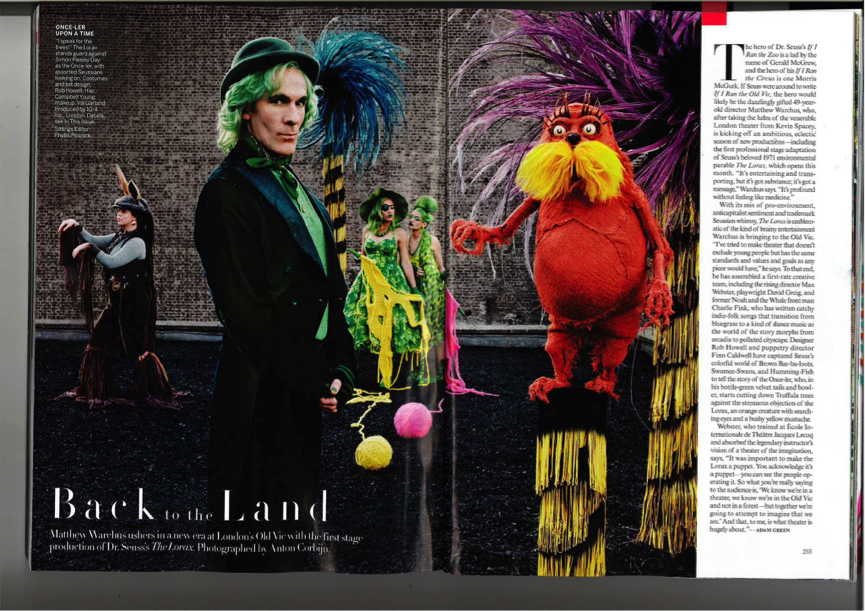 Simon Paisley Day as the Onceler. with the puppet of the Lorax, from the Bristol Old Vic theatre's production of The Lorax. Vogue magazine, October 2015

Newton Paisley was accepted to launch at Decorex in September 2016, the premier interior design event in the United Kingdom. I’ve been going to this show just as a fan for many years, and I had a piece of hand-painted furniture exhibited there two years ago. I was very excited to be launching my first collection of fabrics as Newton Paisley.

Eugenie Barrell of Cognoscentis and I thoroughly enjoyed our time at stand G22. Highlights were meeting so many fabulous and enthusiastic people like the people from Fine Cell work, Hamilton Weston and Peter Hunt who loved my work and tweeted that I was his “favourite discovery from Decorex”. Lowlights were only when: 1.) my friend Kate Coleman gave me a Disney Frozen carrier bag which I had to carry all the way through the Syon Park past all of the glamorous exhibitors and visitors and 2.) when my vegetarian friend Sarah, who was helping me on my stand on the final day, bit into what she thought was a marmalade and peanut butter sandwich but which turned out also to contain, wholly unexpectedly, quite a lot of bacon. A group of keen Japanese visitors arrived at the stand just in that moment and she had no suitable means for ejecting the offending mouthful.

Fellow Whitstable environmentalist Sarah Lonsdale wrote a lovely article about Newton Paisley and the trend for bringing nature into your home for the Sunday Telegraph. She is a wonderful writer and was a pleasure to talk to about my unusual journey. I was very overexcited to be talked about in the same breath as Timorous Beasties, whose work I love. One of the big benefits additional was that it made me tidy my studio.

I was invited by Annika Shelley, the organiser of Hybrid Mode, at Stockholm Design Week, to come and speak about my work. My talk was entitled “More than just pretty pictures: Textiles and the conservation of endangered species.” I talked about how I became interested in portraying biodiversity through the medium of decorative textiles and why I think it is important to engage new people with the stories of species and their struggles for survival. I was chuffed to bits to be on the stage with the formidable Prof Rebecca Early, one the world’s leading proponents of sustainable fashion. Also on the programme was Eduardo Escobedo of RESP who works towards sustainability with luxury labels like Chanel, Armani, Gucci, Bulgari, and Burberry. It was a fascinating experience and I was very encouraged by the response.